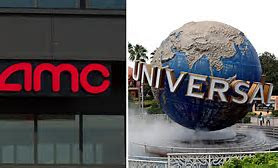 The AMC/Universal deal provides a road-map for the other studios and exhibitors to follow. However, it all comes down to what consumers do. Movie-going may go back to the pre-virus level, but on the other hand, it may not. Regardless, the theatrical window is closing. It is up to cinemas to make going to the movies an experience unmatched at home or anywhere else.
Posted by Cinema Mucho Gusto at 4:00 PM