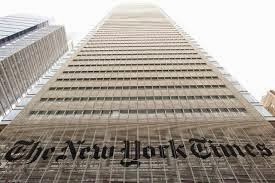 The venerable New York Times says it lacks the staff  to review all of the films that are being released and that it will be independent and documentary films that will be taken off the review roster.

Capable of making or breaking a movie with one of its reviews, the Times' Chief Critic, AO Scott, stated that, "Because of the increasing volume of new films released each year, the Times in no longer able to guarantee reviews of all New York theatrical releases." He added, that new movies would now be chosen for review on a case-by-case basis, but promised that the Times would continue to review as many as possible.

The Times has (in the past) criticized the number of low-quality releases screened at cinemas, for even one or two runs, which would require a review from the famous newspaper.  Termed. 'vanity bookings', Scott says, "It's not hard to spot vanity bookings. There are clues. If there's a chance something will be worth our time and space, we want to review it."

The concern is that a very good film may miss a review and lose out on an Oscar nomination.  The entry rules for Best Documentary Oscar is that the film must have been reviewed by either the NY Times or the LA Times.  "We didn't tell the documentary branch of the Academy to make us the standard and it's tricky because a lot of those are, in effect, good films", says Scott. "We have three staff critics and a good roster of freelancers, but it takes time and space and editorial labor and cost to review so many movies."

I agree that there are just too many movies being produced. Many are not worth big screen time and a great number do go straight to cable or VOD from one of the internet streamers.  As a cruise Netflix or Amazon for films to watch, I see a lot of so-so features and foreign movies - single-star stuff that has no business being shown at a movie theatre.

Do people still read newspaper film reviews?  Or even reviews by web based critics?  If the film is not a big budget blockbuster it's success is mostly word-of-mouth via tweets, texts, or verbal.  There seems to be a documentary on very possible subject, from kudzu to meerkats and each  year more and more would-be filmmakers enter the fray.  There is just too much mediocre product and the Times is right in not wanting to spend the time and money on reviewing them.

Defending his new movie, 'Love' which was screened at the Cannes Festival, film-maker Gaspar Noe' did admit it would "have been hard to make the film in America". There is "nothing nasty" about the film, Noe' stated, however there are explicit sex scenes that do jump out at the audience via the 3D effect.

'Love' tells the story of the melt-down of a relationship between an American ex-pat in Paris and his girlfriend which is perpetuated by the introduction of another female into their relationship.

'Love' will be distributed in the U.S. by Alchemy, an indie film distributor.  It is unlikely that any of the major cinema chains will screen the film. It will carry an 'unrated' rating and it would be a huge struggle to get it into cinemas.

The chances that 'Love' will be playing at your local cinema are very slim. Not only because of the explicit sexual content but that it will have to play in 3D and not many (if any) cinemas are willing to give up a 3D blockbuster for a sex film with a very limited audience.  I think the affair with 'Love' was over before it started. 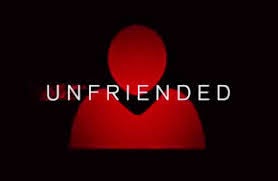 
The first social media horror film, 'Unfriended' is again in release. The film, produced by Blumhouse Productions (a Universal Studios subsidiary), cost about $1 million but last weekend ( in a re-release from 2014)  grossed $15.8 million in the U.S. and an additional $3 million overseas.  'Unfriended' has room to grow over the summer, so if you're an exhibitor and haven't booked it, try and do so.

Blumhouse, best known for its 'Paranormal' franchise has made mega-bucks on its ultra-low budget horror movies.  'Unfriended' takes place within web browsers and Skype cams of teenagers where internet searches reveal half the name of the next murder victim.

'Unfriended' is a winner, especially for drive-ins, but also for indoor cinemas which have a good teen demographic.

Best,
Seymore
Posted by Cinema Mucho Gusto at 11:35 AM