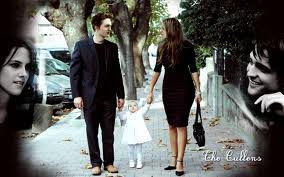 The weekend U.S. box office top 10 movies amassed an awesome $215 million of which Twilight Breaking Dawn - Part 1 (Summit) broke big with 65% ($139 million) of the total and motored to a breath-taking worldwide take of $284 million.  The Twilight franchise is now on its way to accumulating a $3 billion box office.  Given this performance I thought a look at the chronology of a media/entertainment franchise, like Twilight, would be fun.

June 2003 - Stephenie Meyers has a dream about two people in the woods - an "average" girl and a boy who is "beautiful. sparkling, and a vampire." Meyer awakens from the dream and starts writing - calling the main characters "he" and "she" (later she named them Edward and Bella).
October 2005 - "Twilight"  (the first novel) is published and becomes a best selling book that year. Meyer's original dream is Chapter 13.
August 2006 - "New Moon" is published and hits #1 on the NY Times and USA Today best seller lists.
August 2007 - "Eclipse" is published, selling 150,000 copies within 24 hours of release.
December 2007 - Virtually unknown actor, Robert Pattinson is cast as Edward for the "Twilight" films.
July 2008 - "Breaking Dawn"  is published.  The "Twilight" novels become the top four selling books in 2008.
November 2008 - "Twilight", the movie is released grossing over $400 million domestically and $700 million worldwide.
March 2009 - "Twilight" is released on DVD, topping over $197 million in sales.
November 2009 - "New Moon" opens at cinemas, and grosses over $800 million worldwide.
June 2010 - "Eclipse" is released grossing over $30 million just is it midnight show debut.  It goes on to gross close to $1 billion worldwide.
November 2011 - "Breaking Dawn - Part 1" is released amassing $234 million worldwide in its weekend premier.
November 2012 - Tentative release date of the fifth (and final) movie in the saga, "Breaking Dawn - Part 2".

Speaking of Fun Things
2011 is called a Lucky or Money Year. First, because the number one appears so much. For example in dates: 1/1/11, 1/11/11, 11/1/11 etc.  Moreover, October contained five Sundays, five Mondays, and five Saturdays, an event that happens only once every 823 years and there are multiple months with five sets of three days.

Now, for those of you born before the year 2000, take the last two digits of the year you were born and add them to your age.  See what I mean!

The Consumer Electronics Association predicts that worldwide sales of consumer tech products will increase 5% in 2012 and top the $1 trillion mark despite a challenging economy worldwide.  Citing life style changes in the way we receive information for communication, education, and entertainment as the driver for higher and higher sales, the CEA expects mobile devices (smartphones and tablets) as well as Ultrabooks to fuel sales growth.  Over 20,000 new consumer electronic products will be introduced next year on a global basis.