Highlights of the Week's Report:

In a complete 180 from a decades long tradition, the Hollywood studios are finding it more lucrative to release would-be blockbusters to the international market before the U.S. - and with good reason.
The non-U.S. movie market has grown to 70% of total movie grosses from less than 50% a decade ago, making that market much more profitable and, unlike the U.S., global admissions are growing at 7% per year.

The latest example is The Avengers (Disney) which opened wide internationally nine days before the U.S. release and had already grossed over $250 million.  Battleship (Universal) had been in release overseas over a month before hitting U.S. screens and had amassed over $215 million at the foreign box.  Prometheous (Fox), and Ice Age: Continental Drift (Fox) both anticipated to be big earners are scheduled for premier releases off-shore. 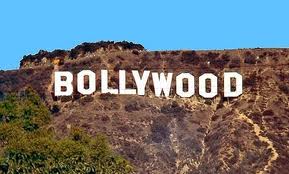 With 3.3 billion admission last year vs. the U.S.s 1.3 billion, Bollywood far outshines Hollywood in size and the Indian box office is growing at a current rate of 10%.  This growth is due primarily to digital cinema which Indian exhibitors have marketed so as to convey the idea of a flawless presentation (which was not always the case with Indian film presentations). Also pushing higher attendance is the Indian notion that not all 3D movies have to be high-impact, action films but are accepting 3D in regular Indian movies.

Multiplexing arrived in India only seven or eight years ago but as shopping malls are exploding across India so are cinemas.  In tandem with this growth, the Indian production studios have linked up with Hollywood studios, such as Fox and Viacom (Paramount) to improve their production skills and sophistication.  It may be that in the future Indian movies cross over and have major release in the U.S. 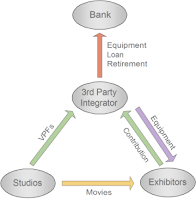 In one of this year's largest acquisition deals, Dalian Wanda, a large Chinese commercial and hospitality property owner, purchased  AMC Entertainment for a staggering $2.6 billion this week.  AMC, which is privately owned by Apollo Global, Bain Capital, and the Carlyle Group (all venture capital firms) and others, is  the second largest movie exhibitor in the U.S., after Regal Entertainment.

Wanda, which is involved in movie distribution and production, will now have a distribution outlet for its products in the U.S. and represents the latest in deals between the movie entertainment industry and Chinese companies.  Just last week, News Corp. which owns Fox Entertainment bought a 19.9% stake in Bona Film Group, one of China's largest film distributors.  And, as previously report in this blog, in February, DreamWorks inked a deal to form a production company with state-owned China Media Capital and Shanghai Media Group.

The Chinese believe  that movies carry  high significance in cultural terms, and want to control the Chinese film industry.  The best way to do this is to buy into Hollywood and the three facets of the business: production, distribution, and exhibition - and they are willing to pay dearly for this.  The AMC purchase is a perfect example,  With over $2 billion in debt the AMC movie chain is, like the other large cinema circuits, a marginal business with few opportunities for continued growth.  It has no control of product (films) and very little control on pricing (either admission or concession). However, the purchase makes sense for the Wanda Group as it 'completes' its vertical integration within the movie industry and provides a large U.S. distribution point for its productions.

Posted by Cinema Mucho Gusto at 7:46 AM 0 comments 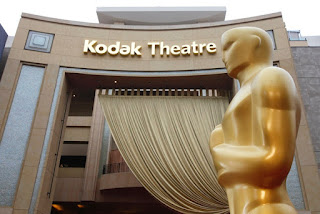 Kodak Gives Up Rights to 'Oscar' Theatre
Kodak gave up the naming rights to the Oscar venue last week. In bankruptcy court, a Kodak spokesperson said it would save the company $3.6million per year. In turn, Dolby signed a 20 year deal for naming rights to the Hollywood and Highland located Theatre and the Motion Picture Academy of Arts and Sciences has agreed that the Oscars will be hosted at the Dolby Theatre through 2033.
The Hollywood and Highland complex houses retail, dining, entertainment establishments, and a hotel; additionally, it is adjacent to the historic Grauman's Chinese Theatre, ABC's TV studio, and the Disney El Capitan movie palace.
Kodak had designed and built the Theatre specifically for the Oscars: the stage, backstage, sound system, and other infrastructure were all oriented to the Academy night award presentations.  It is a very glamorous yet very functional venue in an extremely accessible location.
Given Kodak's current financial situation the naming rights fees can be put to better use elsewhere in the company and I predict Kodak will return as a viable and profitable organization.  As for Dolby, it's a great way to keep their brand in the spotlight (literally) and keeps the sponsorship in the Hollywood family of companies. 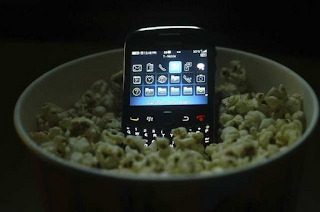 Some Cinemas Give OK to Patron Texting
In a reversal of policy some cinemas are now endorsing a policy to allow texting during the movie presentation.  At a time when teenagers are visiting the cinema less and less it might be time to relax the bans on cell phone use during youth-oriented films.
For me, customer etiquette at cinemas is a big deal.  You are viewing the movie in a room with many others and expect to view the movie unencumbered by other patrons' activities - be it talking, texting, unnecessary moving about, etc. However, young people don't see it that way and could care less if someone is texting during the movie. And they may be right. Lets face it, exhibitors have embraced and are heavy users of communication technology, so don't be hypocritical exhibitors.  Consumers use cellphones to find cinemas, obtain show times, share their movie experience, buy admission tickets and concession, watch trailers, etc. all on their mobile devices. So, can you really use the technology when its convenient and profitable for you and ban it when its not?
Everything is changing regarding movie exhibition and so might what it means to go to the movies.  But than again, isn't going to the movies all about escapism.  Leaving the real world and for a few hours entering a world of fantasy and emotion - isn't that what you pay admission for? To be able to unplug the tether of the cellphone and all of the 'obligations' attached to it, and indulge in undisturbed fantasy.
See, you can argue both sides of the issue -  it's all personal. However, going forward if you are viewing a Harry Potter, Avengers, or Twilight, be tolerant because the person next to you (your daughter or son) may just be texting.
Sony Provides 'Access' to Moviegoers
At CinemaCon I was introduced to Sony's new Access Subtitling System. Access consists of special glasses ( in my case, worn over my own glasses) that display closed-captioned text in up to six languages.  Capable of accommodating both 2D and 3D (via a clip-on filter) these glasses were great.
This is a huge step up in allowing hearing impaired individuals an enhanced movie entertainment experience, while eliminating the need for on media subtitling in various languages.  Good job Sony. 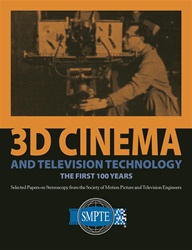 The History of 3D
Let's see now, 3D has been around how long ?  Oh, let's say 100 years, give or take - really !  Yes, really.  The first patent for stereoscopic motion-pictures was filed in 1898 by C. Francis Jenkins, who wrote the book on 3D.  This and other facts, data, and information are compiled in a new 550 page book published by the Society of Motion Picture Television Engineers (which itself will turn 100 in 2016).
I don't usually recommend books or other publications in CMG but if you have the least bit of interest in 3D technology and how it has progressed through the decades this is the book to get. Soft-cover is $89 (less $20 if you are a SMPTE member).  It's also available for download from Amazon.

FROM HARD DRIVES - to - SATELLITES

For the first commercial release of a digital movie, Star Wars - Attack of the Clones, in 2001 the mode of digital transmission was via satellite.
At that time, Entertainment Equipment Corp. was working with Boeing Company (which owned the satellites), Texas Instruments, and Ultra Star Cinemas on the install of six D-Cinema platforms in the San Diego area.  The transmission and subsequent exhibition of the Clones operated flawlessly.

In their wisdom, the Hollywood studios decided to use hard drives for movie distribution and pushed satellite transmission to the back-burner.  Now there appears to be a move back to satellite delivery.

Finalized movies are sent out by the studios in the form of Digital Cinema Packages (DCPs) which are collections of encrypted files.  These DCPs are sent out for duplication and distribution by Technicolor or Deluxe.  However, for satellite distribution the DCP is sent to a satellite transmission service provider (such as Boeing)  - which can distribute the movie to one exhibitor (directly to their D-cinema server) or to ten thousand exhibitors and do it very inexpensively (much less than the cost of hard drives, their delivery, and re-send).  As with hard drives, the exhibitor receives a Key Delivery Message (KDM) which allows for the "unlocking" of the transmitted movie file and also specifies a specific duration of  "play" time of that movie.

The benefit of satellite transmission is lower distribution cost but also the capability of distributing alternative content easily and efficiently, whether a "live feed" or pre-recorded entertainment.

Since the original test I was involved in over ten years ago, satellite transmission and reception have vastly improved.  Technicolor offers satellite delivery via a satellite service provider direct to exhibitors using modern satellite dishes that have a very small physical footprint.  The new dishes can be outfitted with COVERsats which prevent most signal outages caused by rain, snow, and ice.  A COVERsat is wrapped over the face of the dish creating a steep and slippery surface which prevents the accumulations of ice and snow.  Also available are HEATsats, a satellite antenna heater which will completely prevent signal problems from ice and snow.

Given their advantages over hard drive distribution, satellites may be in every movie exhibitors' future.

EXHIBITORS:WHY NOT GO BIG WITH QRs

We are clearly in the age of connection, where access to information is as close as your smartphone, tablet, or other device - and this provides us power.

For example, information is more and more being accessed via scanning codes.  The most common is the Product UPC code (known by us as the Bar Code).  Posted on any product, it provides a range of information from price to date of production.  However, over the last few years several other two-dimensional codes have surfaced.  These codes, made up of a mix of  precisely spaced black dots, lines, and shapes when scanned with a connected mobile device create an automated action of moving to a specific website, generating an e-mail, or dialing a phone number.

﻿ Enter the World of Monster QRs

As you can see from the photo insert, QRs can be used as giant ads on the front or side walls of your cinema - for scanning by consumers as they go by.  It's inexpensive advertising, and takes the consumer to where you want them to be - at your on-line ticketing site.  It lets the young moviegoer know your a "with it" place to see a movie and its easy and convenient.
So go BIG with QRs.
Posted by Cinema Mucho Gusto at 1:45 PM 0 comments