It's Here, Finally: Day-and-Date With Streamers

We have been predicting the exhibition of films at movie theaters and by on-line streamers day-and-date, in the pages of ScreenTrade Magazine and in this blog for years. It is now reality.

At this year's Venice film festival, several films produced by Netflix will be released at cinemas and on Netflix simultaneously following the festival. After the Cannes Festival demanded that all films needed a local theatrical release to compete at this year's festival, Netflix pulled all films from the festival, and the big winner of this was - the Venice Film Festival.

Six Netflix films will debut at the Venice Fest with festival chief, Alberto Barbera saying, "My job is that of a programmer, not a distributor. I see no reason to exclude from the competition of the festival a film because it was produced by Netflix.  In France, the law is different as regards to the windows, but fortunately here we do not have these problems."  And he is right! As I said in a prior post regarding the Cannes decision to ban Netflix films - it was stupid and out-of-touch with what is transpiring in the film industry and that Cannes would be the loser - it already has.

As you would think, some of Italy's cinema exhibs are against the decision by the Venice Festival. Reasoning that the decision hurts them however they are not looking at the bigger picture. Piracy is rampant in Italy so running day-and-date completely destroys the piracy play. Also, the running of Netflix films allows the exhibs to exhibit excellent product at better terms than available from mainstream studios, and consumers will want to experience the films on large format screens with major sound. All of this favors the local cinema operator and they should embrace it.

The Venice Film Festival begins on Wednesday, August 29th, and end on Saturday, September 8th. Wish I could attend this year's fest as it will be historic for movie exhibition.

Beijing and Washington trade talks may scuttle the booming China box office and delay film-quota negotiations. Protracted trade tit-for-tats between the U.S. and China may soon draw Hollywood into the fray.

The U.S. film studios are exposed and vulnerable regarding U.S. and China relations. Hollywood tentpoles currently make a significant amount of gross profits in China. For example, Universal's Jurassic World:Fallen Kingdon earned over 25% of its $1.1b in global ticket sales in China. This year China's box office is up 16% over last year and is anticipated to surpass N. America as the world's biggest theatrical movie market within two years.

Thus far, the trans-Pacific trade spats have had no impact on films as Beijing has been very specific with its retaliatory tariffs and if you want to hurt Trump you don't go after Hollywood (where anti-Trump sentiment is high from left-leaning Tinseltown glitterati).

Another issue is that the big Hollywood blockbusters keep seats full in Chinese cinemas, which if cancelled would probably push the Chinese box office into the red. But that equation could change if the trade spat escalates into a war.  The Chinese have already threatened to hold up licenses for U.S. companies, delaying merger approvals, and increasing border inspections of U.S. goods.

The biggest issue for studios is the on-going, and now stalled, negotiation on China's U.S. film quota. Under the current deal, which expired in 2017, the number of films accepted for release was controlled but also the when and how titles could be released and how much revenue foreign studios could take home (the studios currently take just 25% of admissions).  The push by the studios to renegotiate had made little head-way before the trade spat, now it is essentially dead.

Like most companies doing business with China the idea of selling to the world largest middle class prompted Hollywood to take aim at the (soon to be) world's biggest movie market - but like most companies in any industry that idea is a dream - and don't expect China to change, with or without a new trade regime.

This summer's box office is going great-guns but its only Disney and Universal that are making it big. Missing-in-action are Warners, Sony, and Paramount. This makes one wonder if this is a shift in release strategy or just plain bad product, or a combination of both.

It's not that moviegoers aren't visiting their local cinema - as the B.O. tallied over $2.6b from May 4th - July 8th - a 14% increase over last year's figure.  Disney along is responsible for a whopping 44% of the total, while Universal accounted for 17%. Fox, Warners, Paramount, Lionsgate, and Sony shared the rest. Globally, the story is the same, as the box office is 10% above last year.

Some in the industry believe that placing films throughout the year is a better strategy than loading up in the summer, for example, Warners is releasing 'Aquaman' (its 2018 tentpole) is being released in December.

To be fair, this summer isn't over yet and things may change but the numbers are just too big for Sony or Warners to overcome.

Jim Lavorato
Posted by Cinema Mucho Gusto at 5:33 AM 0 comments

Sicario: Franchise In The Making

Last week, the second film in the 'Sicario' series opened - 'Sicario: Day of the Soldado'. I say series because, I think, 'Sicario' is a film franchise in the making. 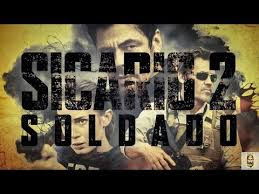 The 'Sicario' franchise, unlike others, is planned to have stand-alone episodes vs. follow-on story lines. Four of the original characters and cast members returned in 'Soldado' but in a new, and unique follow-on film which is not a direct sequel. Emily Blount, who played Kate Mercer, in the first film is not in 'Soldado' but is scheduled to return in the third film in the series.

'Sicario' (which stars Benicio Del Toro) is a crime drama not an action drama, and it is important to note that Taylor Sheridan the mastermind behind 'Sicario' had always envisioned a film trilogy but, I think, there will be more than three.

Like 'John Wick' (Keanu Reeves) and 'The Equalizer' (Denzel Washington) a new genre in Hollywood is the single hero crime drama that, unlike, the superhero films are centered around real-life, believable stories. Yes, they are high-impact films with known A and A- list actors in roles that are not stereotyped from their prior roles which makes these films refreshing and real-lifeish.

'Soldado' cost $35m to make and grossed over $36m in its first four days of release - not bad as the global take in the end will be well over $100m.