Yesterday, Netflix scored a big victory when the Academy voted not to change the eligibility rule for streaming services regarding Oscar nominations.

Amid calls for a crack-down on streamers from some of tinsel-town's heavy-weights , the Academy's Board of Governors voted to retain the current rule which states that 'a feature-length film must screen for one-week in a Los Angeles cinema with paid admissions to qualify for best picture and other nominations.

Spielberg, became an outspoken and vocal critic of Netflix, and other content streamers, after 'Roma' (a Netflix feature film) won three Oscars.
Yesterday, Spielberg upped his rant to the Board but obviously to no avail.

Netflix used the 'four walling' distribution model for 'Roma', whereby it rented out the movie theaters and kept the box office gross.

CMG is in total favor of the Academy's decision. Movies from any source should be eligible and screened at cinemas. Take note independent exhibs. No reason why you can't screen Netflix films.

Is H'wood's Disdain For Trump Hurting The Cine Boxoffice

Hollywood's elite, along with the Democrats and the U.S. mainstream media have been on a tear regarding the Trump administration over the last two years. It needs to stop.

The entertainment industry led by many named H'wood actors have spewed their anti-Trump views be it in song, film, award show speeches, etc. However, social media has taken over from mainstream broadcast and cable news outlets and, I believe, H'wood has lost much of its once powerful influence on pop culture.

The glitterati was in complete melt-down upon release of the Mueller Report. Many used their social media bullhorns to refer to the Mueller Report as a "cover-up" and then attacked Attorney General Bill Barr for agreeing with Mueller's findings that there was no evidence that the Trump campaign colluded with Russia or obstructed justice.

CMG's take: Get Over IT! Admit your mistake and move on. Your opinions are more meaningless than they were before. You're just hurting the industry with your unfounded rants. The cinema needs more support then ever. Competition is fierce for eye-balls and having consumers, who feel slighted by actors who feel they are the arbiters of truth, boycotting the cinema is bad for the box office.

Caught up in the #METOO movement, Roman Polanski is trying to get back his membership in the Academy of Motion Picture Arts and Sciences which ousted him last May.

"The procedure taken to expel Mr. Polanski was fair and reasonable. The Academy stands behind its decision as appropriate" said a spokesperson for the Academy. His expulsion required a two-thirds approval by the 54-member board of governors.

Polanski was dismissed along with comedian Bill Cosby in the response to Hollywood's reaction to the Harvey Weinstein sex scandal and the #MeToo movement.

Polanski was charged in 1977 for raping a 13 year-old girl. He fled to Europe to elude arrest and trial and has lived in France for the last 42 years. He won an Oscar in 2003 for "The Pianist", and his other credits include directing "Chinatown" and "Rosemary's Baby."

At this stage, Polanski should give it up, Live out your days in France and be thankful that you haven't spent a good portion of the last 42 years in jail. The Academy will not budge on their move to expel Polanski - and they shouldn't. 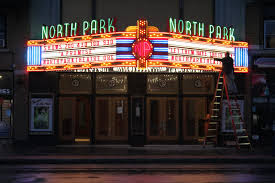 'Hellboy' literally went to hell at the boxoffice, contributing only $11.9m to the very dismal (thus far) 2019 gate.

The summer film roster for this year is very impressive and perhaps the impossible may be achieveable. 'Avengers:Endgame', 'Lion King', 'Frozen 2', 'Toy Story 4', 'Star Wars IX', 'Men In Black International', ' Spider-man: Far From Home',  and the list goes on, could match and possibly exceed 2018.
Wouldn't that be something!

Disney launched Disney+ yesterday - to a lot of hoopla and fanfare. The business press was all aglow in how this online subscription channel would be bad for both Netflix and Apple (which launched its own channel last week).

CMG thinks to the contrary.  We think Disney is too late with too little. At the price point of $6.99 per month, Disney+ is cheaper then the other streamers but also has less to offer - old pixar and other animated films, Star Wars flicks (all of which have already played numerous times on broadcast TV), and the Marvel films (again 'have been seen before over and over'). 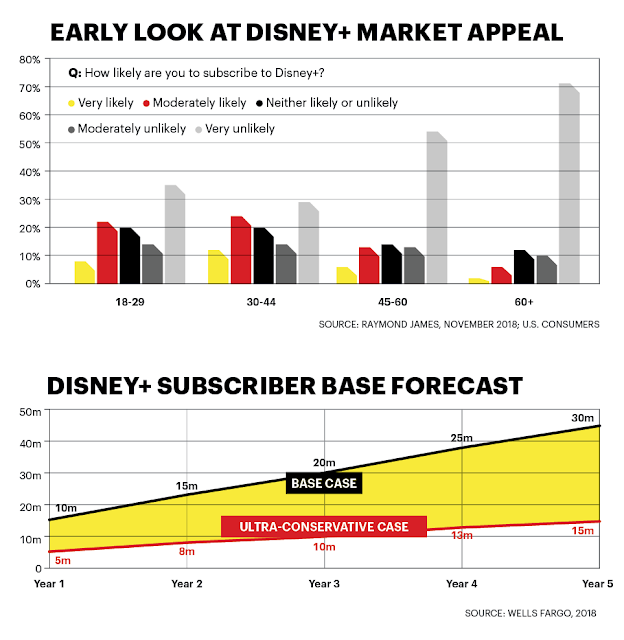 Disney will get an initial burst of subscribers but then flatten out and don't forget they will have to decide whether or not to run new movies in cinemas (and how long that window will be open) or run day-and-date. My guess is Disney will not want to put their cinema release posture in peril and will screen new films 2-4 months after their theatrical release on Disney+. 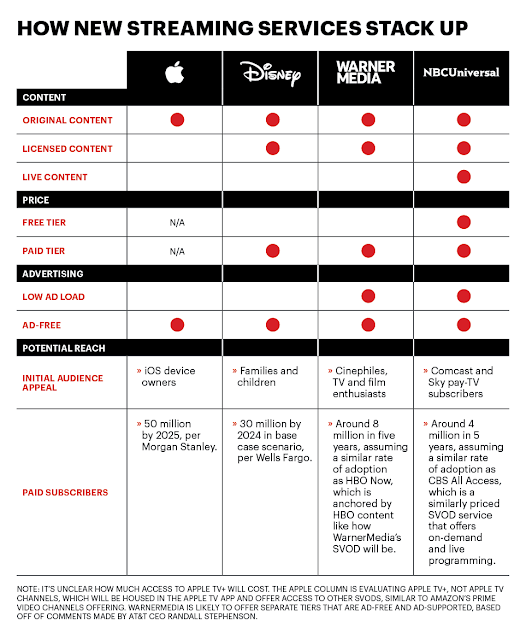 In the world of streaming movie and other entertainment content Netflix is in a world of its own (reference all of the posts to this blog on Netflix over the past 3-4 years).  How the other streamers stack up against each other and Disney+  is partly detailed in the above chart. It is forecasted that Disney+ will have 30 million subscribers by 2024, that makes sense. Apple, with it over 1 billion users of its equipment is forecast to have 50 million by 2025, that also makes sense.
In comparison, Netflix currently has over 180 million subscribers worldwide.

CMG believes Netflix's subscription base will be well north of 225 million in 5 years time - greater than all of the other major streamers combined.

Disney continues to rely too heavily on its past. Hospitality, films, ESPN, etc. just won't cut it going forward. Disney+ is a great idea but it comes too late to the party. Disney will have to produce lots of new content for Disney+ and that will take lots of money - at $6.99 per month, there is no way Disney can run + and make a profit. And don't forget the looming massive debt and management issues that have to be swallowed after the Fox asset purchase.