Disney/Fox Deal A Sea-change For Movies 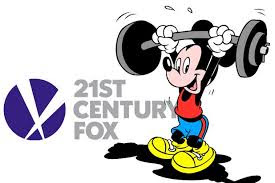 The combined company, 'New Disney', will boast a collection of top-tier franchises from 'The Simpsons' to 'Alien'.  This leaves the other studios looking anemic and much less powerful competitors as against the 'Old Disney or Fox'. Leaving Paramount (Viacom) and, to a lesser extent, Columbia (Sony) up against it and perhaps they are contemplating a merger/combination?

Universal, owned by the mega conglom Comcast, can hold its own. On the other hand, Warner Bros., owned by Time Warner will have to merge or be bought out.  AT&T (Verizon lost out on its bid for Warners) is now vying, awaiting approval from the Justice Department. Regardless, it appears that more combinations/buyouts of Hollywood is inevitable because they will need to compete against the Apples and Amazons which are turning their attention to becoming big media, as well as, big tech companies.

Disney had already been putting pressure on movie theaters by demanding a higher percentage of gross ticket sales for its films - the Disney/Fox combine will give Disney even more of an excuse to demand more from the exhibitors.  For 2017, Disney and Fox released a total of 30 major features and it is unlikely the combine will release as many going forward.  That gap however, I believe, will be filled by the silicon valley players.

Movie exhibition will be forced to add the likes of Netflix and Amazon to its roster of product deliverers for the big screen.  Exhibitors, large and small, will need to get creative and start to use their cinemas with a more diverse and inclusive product line.  On the flip side, Fox was very aggressive regarding the shortening of the exclusive theatrical release window, while Disney argued for a 90 day or longer exclusive theatrical runs.

CMG believes that anyway you slice it Disney just got a lot more formidable in the battle against all comers for entertainment craving eyeballs.

EAT OR BE EATEN

There has been a take-no-prisoners war going on between content providers vs. content distributors for some years now.  The battles being pitched between the Hollywood studios (content) and digital domain stalwarts (distributors).

The war has raged within the digital domain as Amazon and Netflix maneuvered to take ownership of internet distribution of mass media content, particularly motion pictures.  Not only distributing Hollywood produced content but producing their own high-quality content.

Given this scenario, Disney's only play was to eat or be eaten. My own prediction was that Disney would be purchased by Apple (that could pay cash for Disney) as they have long had close relations so that fit would be the least painful for Disney

It now appears that Disney has decided to 'eat' and what it wants to consume is a big hunk of the Fox media empire.  Rumor has it that Disney will be offering Fox $74 billion for the 20th Century Fox film and TV studio, the FX Networks, National Geographic Channels, and 22 regional sports networks. Fox, it appears, wants out and views its assets as being at their peak value.

Disney is betting big that becoming significantly larger will one, prevent (or at least make very difficult) their own takeover, and two, become a much larger player in content production and distribution - the buzz word being 'scale'.  Disney would be the one old-school studio with the muscle to battle the social media giants.

Only time will tell if Disney has made the right decision.

Posted by Cinema Mucho Gusto at 11:57 AM 0 comments

The Perversions Pile Up

It didn't take long, in fact - no time at all - for the accusations to start piling up against pols and entertainment fat-cats in the aftermath of the Weinstein sex scandal.  The avalanche of accusers pointing out sexual misdeeds has widened to include over 200 perverse individuals including Lauer, Hoffman, Ratner, Spacey, and Segal. Weinstein's accusers now number over 90 and growing!

Hollywood attorneys say their phones are ringing and vibrating (no sexual connotation implied) non-stop. Shawn Holley, a showbiz  litigator told CMG that, "Almost all of the women I've spoken with are still trying to figure out what, if anything, they want to do. They are exploring civil, as well as. possible criminal remedies."

Women working in the entertainment industry, at all  levels, are coming forward with horror stories in numbers never imagined.  And journalists are chasing tip after tip pointing to claims of abuse, sexual impropriety, and far-reaching cover-ups. Talent agencies, studios, networks, and law firms are being scrutinized for their roles in enabling, concealing, and even participating in the perverse behavior.

One question being asked of the women accusers is: Did you tell your agent, and what did he or she do about it?  Actress Rae Dawn Chong stated that her agent, CAA, would send her on auditions where sexual harassment would take place. "Did I call my agent and tell him what happened and say how violated I was? Yes. And did CAA take the position of 'We'll protect you?' No. It became, 'Rae Dawn Chong's difficult'. And it did impact my career. Obviously, I left CAA promptly, because it was like a pimp situation."

Women and men who feel victimized are now much more comfortable sharing their experiences with supervisors and HR departments. We'll see how long this cleansing acts will continue but at the moment it appears their is no stop in sight.