What are they thinking? Talk about being where the puck is and not where it's going. The honchos of the Cannes Film Festival came out and stated that movie content must have a French theatrical release to be eligible for their awards - and yes, they've  gone mad!

Aimed at eliminating the on-line content streamers from competition is literally shooting yourself in the foot (no head). Netflix is spending over $8b on original content this year. Amazon, Apple, and now, Disney are producing content for on-line consumption.  The key to all of this is that consumers want, and only want, content that engages them - and they don't care where is comes from.

The Cannes Fest, and others like it, must realize that they do not have the clout they once garnered. The once great and influential festivals have become  irrelevant in the greater entertainment industry, except by the people that run them and perhaps those that benefit from them. Getting an endorsement from the Cannes Fest gets a big shrug from movie goers - the same holds-true for Toronto. Tribecca, Sundance, Teluride, etc.

The movie industry is evolving, growing, and the new mantra is providing what the consumer wants and not what the industry decides they need. And, a big part of that want is going to come from the streamers. I've said it before, movie exhibitors must embrace the streamers and look to them as an adjunct source for quality content that consumers want to engage with. Screening day-and-date with a Netflix debut is a good thing for cinemas.

The Cannes folks are wrong and give much too much importance to their impact and relevance within the movie industry.  Their heyday is over. They need to see where the puck is going if they are to have any hope of surviving.

'Black Panther' became the first commercial movie to be screened publicly in Saudi Arabia in 35 years.

The movie screened at an AMC theater in the Riyadh's King Abdullah Financial District, is the first cinema to be opened since the 35 year old ban went into affect. All of the cinemas in the Kingdom were closed in the early '80s as men and women sitting together was viewed as taboo. The government as recently relaxed enforcement of laws banning co-mingling between unrelated men and women, although it still remains a grey area.

This marks an important moment in the Kingdom's modern-day history as it is part of the country's development of an entertainment industry and its adoption of a more liberal view-point to shared recreation.

The Riyadh AMC multiplex is the first of up to 100 planned to open in the next several years. The Kingdom's plan is to have about 350 cinemas throughout the country by 2030, which are anticipated to generate over $1b in admissions each year.

Clearly, the Saudi consumer is over-due for the cinema experience and the country's adoption of modern entertainment venues will be a huge success.

Disney Gets Beat-up By Redbox 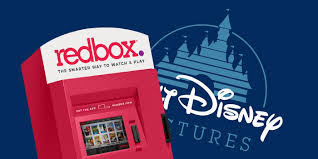 In a court ruling last week, Disney was found libel for committing copyright misuse. Then, quickly re-grouping, made changes in the way it licenses its content online and re-applied for a new injunction aimed at preventing Redbox from selling movie download codes.  Disney contends that Redbox is violating its copyrights by disassembling "Combo Packs" - a Blu-ray disc, a DVD, and a movie download code which can be redeemed through authorized digital outlets.

Disney lost in its first motion for a preliminary injunction against Redbox. In that case, Judge Dean Pregerson found that there was no dispute Disney couldn't prevent consumers from transferring Blu-ray discs and DVDs contained within Combo Packs. Citing a copyrights first sale doctrine that provides that someone who lawfully acquires a copyrighted work is entitled to sell or dispose of their copy.  The judge found that Disney's restrictive license terms given them "giant power beyond the scope of its copyright to works like Star Wars and Frozen. Combo Pack purchasers can not access digital movie content, for which they have already paid, without exceeding the scope of the license agreement unless they forego that right."

This whole mess puts Disney in a bad position as Redbox readies to sell a Combo Pack for Black Panther and after that all movie content.

Posted by Cinema Mucho Gusto at 10:36 AM 0 comments

Hmmm..... so what does the U.S. based Motion Picture Association of America do?  It pivots and gives a BIG HO-RAH to Netflix and other streaming services, including home entertainment spending in its annual report on the health of the movie business.

There is good reason for the pivot, considering the explosion in digital subscription services vs. the volatile cinema market and the death of DVD sales/rentals (once the major contribution to Hollywood's coffers). In 2017, global spending on cinema and home entertainment totaled $88.4b with home entertainment responsible for $48.4b of which $32.1b was digital content streaming.

The MPAA is comprised of the six major studios: Disney, Fox, Paramount, Sony, Universal, and Warners all of which sell their movies to streaming services; however, they have a conflicted relationship with Netflix, which also produces original content for movies and TV productions - which will exceed $8b this year. Netflix has also irked movie exhibitors by refusing to abide by the theatrical window in trying to screen its original films at theaters - as they do at the iPic Cinemas.

The demographics of films is also changing, making traditional films (particularly non-blockbusters) irrelevant. The 25-39 age group continued to have the most frequent moviegoers followed by the 40-49 age group. Next came the 12-17 group followed by the 18-24 group. The worst stat in these numbers was that the 18-24 group's attendance was down 28% while the 12-17 group was down 22% from 2016 - not a good sign for the future.

Among ethnic groups, Hispanics were the highest, going to the movies 4.5x on average per year, followed by Asians at 4.3x.  Caucasians purchased 55% of all tickets sold, Hispanics 23%, Blacks 12%, and Asians 7% - these stats pretty much mirror the population figures of these groups.

More than 263 million N. Americans went to the cinema at least once in 2017, with ticket sales essentially split evenly between female and male moviegoers.

- Less people (particularly the younger age groups) are going to the movies.
- Higher ticket pricing is making up for the slide in admissions - (sustainable?).
- Lots more is being spent on streaming content vs. cinema viewing
- The trend in home entertainment is: a lot more quality content will be available.

My take is that cinemas must embrace the Netflix's of the world and began to strike deals with them to screen their content as well as Hollywood's output. The studios are already doing it - why not cinemas?

MoviePass - How LOW Can It Go ?

CMG has been following the MoviePass saga for several years and last week it reached new heights in testing credulity.

MoviePass, the subscription-based service which offers low movie admission pricing, seems hell-bent on trying to confound, not only, the theater chains and  major film studios but anyone who has been following their quest to disrupt the long-standing cinema admission/concession pricing tradition.

The company, last week, pared another dollar off its monthly fee, so now a subscriber is entitled to one movie ticket per day for $6.95 per month!
The only catch being that users must pay for a year upfront and there is a one-time processing fee of $6.55. So, that's $89.95 to join.

It's hard for me to count the number of times MoviePass has changed its pricing scheme. When it launched, 6 years ago, the price was $40 per month. Then it was raised to $50 per month, there were several others price changes, but most significantly, 8 months ago the price was slashed to $9.95. That change had the desired effect of increasing the user rate, which ballooned from 20,000 to 3 million!

MoviePass has many critics, most notably the large cinema chains and studios which believe the service cheapens the moviegoing experience. Additionally, studio executives stress over the fact that the company will not survive (it pays mostly full price for the movie tickets it subscribers use) and believe that its users (left out in the cold) will never want to pay the regular price of admission - now averaging $9.50.

Still, MoviePass presses on, but not without competition. A company called Sinemia, which launched several years ago in Europe, recently entered the U.S. market. Sinemia provides two movie admissions for $9.99 per month and unlike MoviePass, includes IMAX and 3D screening in its offering.  But Sinemia's two tickets per month is a far cry from the 30 admissions per month MoviePass users can obtain.

It remains to be seen if either of these disruptors will turn a profit.  For its part, MoviePass is committed to its quest of eventually striking agreements with  movie exhibitors to share in their admission and concession profits as more and more of its users crowd into cinemas. So far, that hasn't happened.

MoviePass's 'burn-rate' gets higher as they get more subscribers, so they need to make deals and they need to do that quickly. Can it drop its price to $4.95 per month?  Only time will tell.