'A' Listers and Voice-overs

Why do 'A' Listers rent out their iconic voices to be in the world of animation?  From Eddie Murphy (Mulan, Shrek) to Brad Pitt (Sinbad, Megamind, Happy Feet), Emily Blunt (Gnomeo and Juliet, My Little Pony). The majority of the time these big-screen stars do multiple voice-overs.

Jackie Chan, who has appeared in over 150 films has lent his voice to Kung Fu Panda, Nut Job, and the Lego Ninjago films.  Johnny Depp lent his voice to Corpse Brides and Gnomeo and Juliet.  Hugh Jackman, who broke into the industry with his casting as Wolverine in X-Men, but despite his action hero roles he has found time to voice-over in films such as Happy Feet and Rise of the Guardians.

Why do these stars do voice-overs? Because they are fun! You get to be in the best animated films portraying over-the-top, funny characters, most of which aren't human. The scripts are normally very funny and there is no worry about make-up, wardrobe, stunts, sets. Most of the films are family-friendly and you can 'play' anything: from alien, to fish, to donkey and humanize the role.

It's all great fun and each character takes on a life of its own with an iconic voice of a noted actor.

It's no secret that H'wood uses street gangs when shooting movies in inter-city locations. Tech production advisers work with gangs to smooth out the 'rough issues' (which can get very dicey). 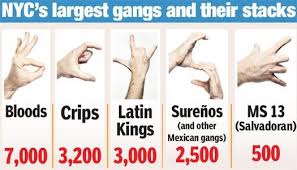 It's very careful work in dealing with gang leaders in using their turf and fellow gang members as movie extras. The production advisers negotiate the where film crews will be and when the film shooting with take place. But even then, movie cars disappear, props are stolen, and money is paid out for safety. The film crews must be seen as guests and not neighborhood occupiers, and the gang members must be empowered in the process. For the most part, if treated correctly, street gangs will cooperate and lend real cred to the movie.

Normally, a community leader is hired as neighborhood liaison. That person will help ease the path and aid in selecting the people who will, in turn, be hired as background cast and perhaps even a small part in the film.

So, when viewing your next film where street gangs are involved remember - 'Real life is just on the edges and it's not all that good'.

Well, it didn't take long, as the staid and geezer-ish Academy of Motion Picture Arts and Sciences put the kibosh on its August 8th announcement that a new Oscar award for 'Achievement in Popular Film' was to be awarded.  You know, the Oscar for the movie that had the biggest gross for the year.

It seems there was a lot of backlash to the proposal from the Acad rank and file - as they want to keep the artistic theme (as if it ever existed) of the Oscars to remain undisturbed. Dawn Hudson, the Acad's CEO stated "the leadership of the Academy is still committed to the new prize in principal."

My take is that even if adding or changing several of the prize categories, the disinterest of the public and the sagging ratings of the Acad show is due to any number of reasons. Certainly the changing viewing habits of consumers and Tinseltown's over-the-top political biases are but two. The Oscars show is too long and too boring which begs the question that has been raised (and which I totally agree with) - the sale of the Oscars show by the Academy to a net-streamer, ie Netflix.

This would eliminate the broadcast rating issue completely, make for a better show, give it the funding needed to make it a shorter but more entertaining event, and take the politics out of the whole process. If not, then the Oscars will continue to lose viewership and become more irrelevant than they already are.

Abnormal, as it may be, big grossing films continue to be released throughout September - with 10 major opening over the next several weeks.

1. 'Nun' - a sequel to 'The Conjuring' film franchise, is going to provide horror fans a new favorite and possibly iconic movie. Opens 9/7

3. 'The Predator' - another addition to the Predator/Alien saga. This flick has been touted as a super thriller/action film and a moviegoer fav. Will not disappoint Predator fans. Opens 9/14

4. 'A Simple Favor' - a noir-thriller about a girl whose best friend mysteriously disappears - the truth will win out eventually. Opens 9/14

5. 'White Boy Rick' - a true bio about the youngest informant/drug dealer in FBI history. Set in
1980s Detroit it is thought to be an Oscar nominee. Opens 9/14

6. 'The House With A Clock In Its Wall' - Long title for a pre-Holloween family-friendly film with a great cast and storyline. All around good entertainment. Opens 9/14

7. 'Life Itself' - A love story that has repercussions across many family members. A tear-jerker that will require lots of Kleenex. Opens 9/21

8. 'Assassination Nation' - this Oscar favorite explores several themes, such as the highschool experience and the force of the internet on young adults.  What brings on the mayhem and chaos in our schools. Opens 9/21

9. 'Night School' - Comedy about a couple joining forces. A student and teacher both return to school where everything goes wrong. Opens 9/28

10. 'Smallfoot' - A Warners animated film with a star-studded cast of voice-over givers. Great for kids and adults alike. Opens 9/28

So, take a trip to the movies this September, the summer just keeps on giving at your cinema.

Posted by Cinema Mucho Gusto at 11:22 AM 0 comments

It's not every day that a company files for bankruptcy because its founder is accused, by dozens of people, of sexual misconduct. It's rarer still when the alleged victims convince the case Judge to lift a stay on their class action lawsuit which are normally suspended in bankruptcy proceedings - but that's what happened last week!

The filing group, called the Official Committee of Unsecured Creditors, filed and won a lifting of the stay against their lawsuit, and they weren't the only ones. Alexandra Camosa, an alleged Weinstein victim, was an associate producer on the Netflix show 'Marco Polo'. She is not only suing the Weinstein Company but also individual members of the Board of Directors in a $10 million complaint for associated sexual harassment charges.

The problem is that, the Lantern Company, which purchased the Weinstein Company assets for $289 million will have to pay up if Weinstein loses the suits and it appears that the $289m won't be enough to cover the settlements - which include claims by the Directors Guild of America, the Screen Actors Guild, and the Writers Guild of America.

To make matters worse (and even more nuts) another motion has been filed with the bankruptcy court by Endemol Shine, which has initiated a lawsuit in England against Lantern over whether the Weinstein Company contracted rights on the 'Peaky Blinders' show terminated due to Harvey's alleged sexual dalliances.

The next hearing in the Weinstien saga will take place on Sept. 5th in Delaware.

What's Harvey Up To?

For his part, Harvey has denied perpetuating any unconsenual sex acts. At worst, he says he used his position of power to "score sexual favors".  According to Ben Brafman, Harvey's attorney, "Mr Weinstein did not invent the casting couch in Hollywood".

Harvey is also facing sex trafficking charges, and he has asked the Court for an official definition of "a commercial sex act".  Which begs the question: Does the possibility exist that a film role represents value? If so, then Harvey's actions would be classified as a 'quid pro quo', ie. an acting role in fact have value. However, up to now, the Judge in Harvey's criminal case has ruled that "the expectation of a film role, a modeling meeting, or other such promises have no real value.

And so it goes!