Celebrities, particularly big stars, by their very presence cause security and crowd problems.  Being present at a public forum, such as a courthouse, voting station, or charitable event usually makes for problems.

Case in point: jury duty.  Crazy but true. Last week Charlie Sheen appeared for jury duty - What!  Can you imagine Charlie in the jury box determining your fate.  Even he thought the scenario was way too nutty - as he snapped a photo of himself entering the courthouse.  Needless to say, Charlie was 'excused' before he make it to the jury box.

In another case, Steve Martin tweeted "REPORT FROM JURY DUTY: defendant looks like a murderer. GUILTY. Waiting for opening remarks"  In fact, having celebs as jurors is such a joke that celebrity news site TMZ has a "Celebrity Jurors: Reporting For Jury Duty" tag.

Tom Hanks appeared for jury duty last month and the case he was assigned to was declared a mistrial after a star-struck member of the LA City Prosecutor's Office cornered Hanks and began asking questions while admitting fanatic devotion to him, which lead to an allegation of jury tampering by the defendant.

Do celebs make good citizens - hell no! But it may not be all of their fault. 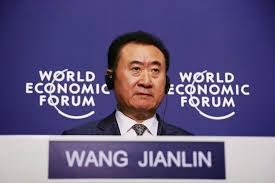 Building The Largest Film Studio Ever

Wang Jianlin, a Chinese property mogul, is in the process of building the largest and most expensive film studio complex ever constructed.  The Chinese government is hell bent on shaping an image of China as progressive and modern, but different then America - and media (particularly motion pictures) is an all important factor in developing that image.  So, last week, Wang, China's richest person, held a gala and broke ground, on what will be the largest film studio ever constructed.  At an estimated cost of $5+ billion the studio will be built in Qingdao, a quiet city (by Chinese standards) of three million people on the country's east coast.

The Qingdao Oriental Movie Metropolis is expected to open in 2017 and will cover over 2 square miles.  It will include: 20 sound stages, a studio for filming underwater scenes, a car show/museum, seven resort hotels, indoor amusement park, 300 slip yacht club, and a hospital among other facilities.

The 58 year old Wang, chairman of the Dalian Wanda Group, which purchased the AMC Theatre chain last year is the world's largest movie exhibitor.  Stated Wang, "The studio is the most expensive film industry investment of all time, an unprecedented project that will create history.  China's cinema audience is currently the world's second largest, I expect it to take the top spot from the US by 2018.  With the huge potential that comes with a population of 1.3 billion, the global film industry will recognize that the sooner you partner with China, the sooner you make more money."

Critics, however, say that no matter how much cash you throw at it, China will not be able to best Hollywood until its film industry and makers are given full creative freedom.  I tend to agree, but you never know.  Wang recently donated $20 million to the Academy of Motion Pictures and Sciences in LA, which will name a new film library in his honor. 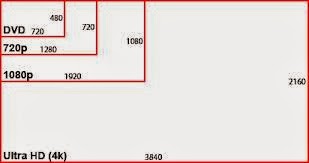 Ultra High Definition (UHD) known as 4k (which refers to the number of pixels that run across the screen) serves up four times as much information as today's High Definition TVs (1k) image and your local cinema's 2k on-screen image.

The UHD-TV or cinema 4k is eye-popping visually but comes with a high price.  For TV, sets must be large for viewers to appreciate the value of 4k; however, consumers will not buy a 4k set unless there is content available to watch on the larger screen.  Trouble is, content providers and studios don't want to invest in 4k content until there is a large consumer base of UDH-TVs in living rooms. 4k TVs nonetheless are creeping into living rooms.  Currently, 30% of all TVs sold are 50 inches or larger and falling prices will ensure this trend will continue.

Not to be left out, content streamers are entering the fray.  Recently, Netflix CEO Reed Hastings commented, "4k capable tablets and PCs will catch on before 4k TV and thus consumers will need broadband connections capable of streaming 4k video.  The Hollywood studios have been building up a large archive by scanning movies in 4k, meaning internet streamers, like Netflix, will eventually have a decent library of on-demand 4k to tap into."