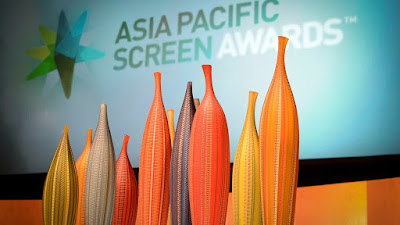 The Eastern answer to the Oscars, are the Asia Pacific Screen Awards, which were held on November 24th and broadcast from Brisbane, Australia. As CMG has foretold, the Oscars will continue to be more and more irrelevant as movie viewership shifts to Asia.

As you can imagine, the winning films at the APSA would be unknown to U.S. moviegoers except for the most avid of cinema fans. This year's Best Picture Award went to 'Cold of Kalandar' a Turkish film.  Other winners were:

Best Actress: Hashine Killip in 'Ordinary People' from the Philippines
Best Actor: Manoj Bajpayee in ' Aliyarh' from India
Best Director: Feng Xiaogung for 'I Am Not Madame Bovary' from China
Best Documentary: 'Starless Dreams' from Iran

Many other Awards were given, the categories similar to the Academy Awards. The point being that there is a massive shift taking place in the global cinema industry. As Asian countries modernize and prosper their cinema industry grows as part of their greater cultural growth.  In doing so, Hollywood becomes less important. In fact, all of the major Hollywood studios have inked co-production deals with Asian movie producers.

The U.S. Academy of Motion Picture Arts and Sciences has become too self-absorbed and social correctness has infiltrated into its structure and selection process making, in my opinion, the Oscars less relevant. The major studios are going where the money is and that is Asia. They have placated to the social and political wills of China and are aiding Chinese government controlled production companies in making films specific to Chinese tastes - bypassing Hollywood entirely.

"As you stand-back and look at the APSA Awards two things hit you. One, is the issue of the family and the importance and role of the family in everyday life.  The other is the extraordinary quality of the performances. I have never seen that many outstanding performances - ever. Anywhere" said David Puttnam, Head Jurist for the APSA. "We could have awarded six male best acting awards."

Hollywood glitterati need a wake-up call. Their smugness and over-the-top political rants have run out of steam. They need a new shtick. As an example, many H'wood stars promised to leave the U.S. if Trump was elected, figuring that Hillary was a shoe-in. How many have now left? None.  The game is changing in the global cinema industry - its epicenter is moving out of Los Angeles and into a whole lot of other places in Asia.

Posted by Cinema Mucho Gusto at 11:40 AM