Think this is a far-fetched notion? Let's dig deeper. 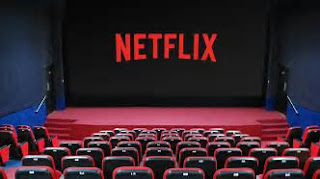 I've seen several reports in the media that have suggested the end of the movie theater and by extension the movie industry because of the virus. Wrong! The cinema is an art form. The production of a feature film is a grand endeavor, which in most cases, requires scores of  people to complete. Predicting the demise of movie-making is equivalent to predicting the demise of book publishing.

Netflix was on track to spend $17.3 billion on global content production this year. It would not be a stretch to think that Netflix take half-a-billion and purchase a multiplex chain and use the theaters to showcase its own content, as well as, other distributors.


Binge-watching makes for content that is long in production as multiple episodes are required. For 2020, Netflix is good-to-go with its current slate of content but for 2021 it has a big problem in delivering episodic-driven content given production has ceased. This production issue is across the board, be it for Amazon, Disney, Apple, and other streamers.

To offset this content shortfall coupled with the added problem Netflix faces of currency exchange (a very strong U.S. dollar vs. subscription fees that are collected in much weaker foreign currencies) will put pressure on earnings in the later part of 2020 and through 2021.

This problematic scenario could be solved by Netflix's purchase of a major cinema chain:
- It could showcase it own and others content
- Purchase a chain at a bargain price
- Enhance its relationship with film production people - from directors to actors.
- Get closer to its U.S. customer base which is currently static in terms of added subscription.
- Be a real boost to the cinema industry and other movie exhibitors as they would be screening Netflix productions as well as traditional HWD content.

The idea of Netflix becoming a theater operator isn't as far-flung as imagined, in fact it makes for a good strategic play.