As a follow-up to a previous CMG post, the Intl' Alliance of Theatrical Stage Employees says, "it's getting closer to seeking an agreement on its key priorities."

The key priorities needed to be agreed to with the Hollywood studios and streaming content providers are: curbing the long production hours and streaming pay scales.

The negotiations are in their first week but the Union has already voted to strike if the talks fail to produce a deal. 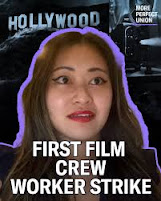 The Union issued a statement saying, "We are committed to reaching a deal. However, we're not going to let this drag out for weeks and weeks. We want to see significant movement quickly."
The negotiations are under a media blackout, but what is know is that the content providers have agreed to provide a 10-hour 'turnaround' between shifts for all production workers. Meaning that the maximum hours for any shift cannot exceed 10 hours.
The talks continue but it seems to be slow-going. The last thing the entertainment industry needs is a production stoppage - given all of the production shut-downs and delays caused by the pandemic.
We'll keep you informed.

Posted by Cinema Mucho Gusto at 9:41 AM